Nespresso machines are commonly used nowadays because they convey two important benefits to the coffee drinker. One, these machines brew coffee really quickly, and two, the coffee made with them is extremely delicious. And that’s probably why capsules for these machines are hotter than ever, and more people are buying them to brew their morning cup of coffee.

Due to these machines increase in popularity, the capsules for these machines come in more flavors than ever before. Although this is a very good development, it can also make it hard for coffee drinkers to find the best capsules to buy. To help these people out, we’ve discovered the ten best Nespresso capsules and have listed them below for their convenience.

This variety packs contains capsules compatible with the Nespresso OriginalLine of machines and contains 6-boxes of pods. Each box contains 20 capsules, so coffee lovers can expect a total of 120 capsules in total. The capsules in this selection include a Ristretto capsule that’s sweet and has chocolate notes in it, an Arabica that has mild acidity and has citrus notes in it, an Intenso that has full-body with berry notes in it, an espresso with cocoa notes, a Verona with red fruit acidity to it, and a Lungo that has a creamy balance to it. These pods are recyclable, easy-to-use and taste great. 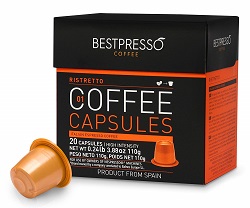 This 120-pack of recyclable capsules are designed for OriginalLine Nespresso machines and are so simple to use just about anyone can. These capsules contain a genuine Ristretto blend that delivers high-intensity flavor for espresso lovers who need a little bit of an extra kick. This Italian coffee is made using a blend of Arabica and Robusta beans that delivers a rich, vibrant flavor that simply can’t be ignored. And since these capsules can be recycled, they’re better for the environment than some of the other pod coffee making systems available. The perfect cup of strong espresso is never too far away with these capsules.

This Nespresso capsule assortment pack has 50 aluminum capsules that can be used to create one of five different coffee blends. In this assortment, there are 10 Roma, 10 Capriccio, 10 Arpeggio, 10 Livanto, and 10 Ristretto capsules. These are a variety of dark and medium-roast coffees, with intensities from 5 to 10. It’s an assortment of coffees including Arabica and Robusta coffee varieties. Since these capsules are made from Aluminum, they are easier to recycle than plastic ones. If there’s one drawback to these machines, it’s that they are not compatible with VertuoLine machines and can only be used in OriginalLine Nespresso machines.

These colorful aluminum capsules come in 4-different varieties, and each box contains 40 capsules in all. That means that coffee lovers will get 10 Altissio, 10 Intenso, 10 Stormier and 10 Diavollito capsules. Each variety is a different blend of coffee and provides a nice rich cup of coffee. These dark roast espresso and coffees have Nespresso intensities of 8 to 11 and are compatible with all VertuoLine Systems. Since each of these coffees is contained in an aluminum capsule, they’ll not only retain their coffee freshness for a long time, but the containers themselves are easy to recycle.

Although these capsules can’t be used with the VertuoLine of Nespresso machines, they can be used with the OriginalLine of machines and brew up nice 3.7-ounce cups of coffee. This product produces a rich coffee that has notes of toasted malt and creates a great cup of Fortissio Lungo. These capsules are available in sizes from 10-capsules all the way up to 50-capsules, so coffee lovers can buy the size pack that fits their particular needs the most. Each of these capsules is made out of recyclable aluminum, so they can be recycled instead of being tossed into the trash. And this makes them better for the environment.

These aluminum Nespresso capsules are designed for the VertuoLine machines and aren’t compatible with OriginalLine machines. Inside each of these capsules are grounds made from 100% Arabica beans that include a unique blend of Central American coffee beans and Split Roasted Brazilian Bourbon coffee beans. It’s a caramel flavored blend that brews up a beautiful 7.8-ounce cup of coffee. Since each of these capsules are manufactured using Aluminum, they’re sturdy, easy to recycle and they lock in the flavor of the coffee until the coffee lover is ready to release it by brewing it.

This sample pack of Nespresso compatible pods can easily be used with the OriginalLine machines but cannot be used with VertuoLine machines. Even so, these pods come in 40-count boxes that contain 4 wonderful varieties of espresso blends. The four varieties available in this variety pack include a Crema Scura, a Nerissimo, a Ristretto, and a Richezza espresso blend. Each of these flavors is sealed in a hermetically-sealed aluminum capsule that locks in the flavor and aroma until the moment it’s brewed. Anyone who enjoys Starbucks Verismo, Solimo or Dolce Gusto is going to love these espressos.

Sold in sleeves of 10 capsules each, this pack of Nespresso capsules contains 3 sleeves and gives the coffee lover 30 capsules to enjoy. Each of these capsules is made out of aluminum, so the rich coffee flavor that’s contained within them is protected from light and air. Each of these capsules is compatible with Nespresso VertuoLine Systems and contain a medium roast coffee with an intensity of 6. This blend of coffee is made from Central American and Brazillian coffee beans that deliver an exceptional flavor when its brewed. Anyone looking for a good Melozio espresso is going to want to try these capsules out.

These Nespresso capsules contain a special blend of Arabica beans and are designed for coffee drinkers who love the taste of a medium roast coffee but doesn’t want all of the caffeine that comes with it. These decaffeinated capsules each brew 7.8-ounces of coffee and are made with a blend of Brazillian Bourbon and Central American coffee beans. These aluminum capsules are recyclable and are designed to be used in the Nespresso VertuoLine system. Each of the cups in this 30-capsule pack features a medium-roast coffee that has a Nespresso Intensity of 6. They are the perfect coffees to begin the day with or for drinking after dinner.

These bright green aluminum capsules are designed to be used in VertuoLine Nespresso machines, and as such, aren’t compatible with the Original Line of Nespresso machines. For those people who have one of these newer models, however, these capsules may just be what they’re looking for in a coffee. That’s because these capsules contain a dark roasted coffee that delivers a rich, bold flavor and has a Nespresso Intensity rating of 8. The coffee in these capsules is made from an interesting blend of Guatemalan and Nicaraguan coffee beans that are perfectly roasted until they’re dark and brimming with flavor. They are then sealed in these aluminum capsules to keep them fresh until they’re used. 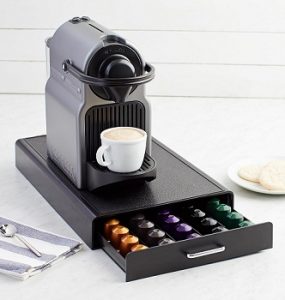 Nespresso machines have been making quick, convenient cups of espresso and coffee for quite some time now. They’ve been an easy way for just about anyone to whip a hot cup of their favorite caffeinated beverage. Unfortunately, not many people realize really understand their machines or the capsules they use. And that’s why we’ve written this guide which will help the average coffee drinker buy the best Nespresso capsules for them.

The History Of Nespresso Machines & Capsules

Nespresso machines were first invented and patented by Eric Favre, an employee of Nestle. It was initially introduced to the market in limited markets in Switzerland during this time, but it didn’t achieve much success at the time. About ten years later, Nespresso tried again to market its machines, this time in Japan, France, and Italy, as well as Switzerland. Although the machines had a small start in these markets, it began to achieve more momentum and popularity during the next following years.

What really made these machines popular, however, was when Nestle signed contracts with coffee manufacturers including Turmix, Magimix, Alessi, Krups, Siemens, and De’Longhi. In 1996, Nespresso patented the process of brewing espresso from their Nespresso capsules. And the rest, as they say, is history.

In 2014, Nespresso decided that they needed to expand their line to increase the popularity of their machines in Canada and the United States. They did this by launching the Vertuoline system of machines and the capsules that go with them. This system is capable of producing espresso and coffee in a number of sizes, according to the capsule used. The sizes include 1.35-ounce espresso, 2.7-ounce double espresso, 8-ounces Gran Lungo, 8-ounces of coffee and 14-ounces Alto XL. The capsules used for these machines are called the VertuoLine, and they’re not compatible with the OriginalLite machines that are also sold in the U.S.

The Difference Between VertuoLine & OriginalLine Capsules

The VertuoLine Nespresso capsules are different from the OriginalLine in several different ways. One, the machines that use this system use a mixing system that mixes the water and the coffee capsule at speeds of up to 7,000 RPM to blend the coffee thoroughly and also to create a variety of different coffee drinks. The VertuoLine capsules also have a bar-code on them that allows the capsule to relay five different parameters to the machine. These parameters are temperature, volume, water flow, rotational speed and infusion time.

What Nespresso Capsules To Buy?

A common question asked is what Nespresso capsules to buy and that question can only be answered once all of the necessary parameters are considered. For example, if you have an OriginalLite machine, then you’re not going to be able to use VertuoLine capsules and vice-versa. However, while that sorts things quite neatly, it doesn’t fully answer the question at hand because the Nespresso machine user still has to decide whether they can buy Nespresso compatible capsules or need to buy actual Nespresso capsules.

With the OriginalLine machines, the user can buy capsules made by Nespresso or they can buy Nespresso machine compatible capsules manufactured by other companies. That’s not the option that VertuoLine machine owners have, however. Coffee drinkers who own these machines have to use Nespresso brand capsules and can’t use off-brand capsules.

Where Can You Buy Nespresso Capsules?

Coffee drinkers with Nespresso machines can buy their capsules from a variety of different sources, this includes the following stores:

Of course, the above stores are only a few of the places where you can buy Nespresso capsules. It should be mentioned, however, that one of the most convenient places to purchase these capsules is Amazon. That’s because while some of the above stores may contain one type or another of the capsules, Amazon is one of the few places that sells both VertuoLine and OriginalLine capsules.