There appears to be quite a bit of confusion around the term white coffee. Some people seem to think that it’s coffee that has milk, cream, or other coffee additives added to it that make the coffee appear to be white. However, what those people are describing is either a Cafe Au Lait or a Flat White. Actual white coffee is something different altogether.

What Is White Coffee?

The term white coffee doesn’t refer to how the coffee is served but refers to how the beans are roasted. White coffee is roasted at a lower temperature and for a shorter amount of time than even light roasted coffees. While light-to-dark roasted coffees are usually roasted at anywhere from 450 to 500-degrees Fahrenheit, white coffee is only brewed at 325-degrees Fahrenheit. The results are white looking coffee beans that are extremely hard and needs a specially made coffee grinder for it to be properly ground.

Because it is roasted at lower temperatures than other coffee roasts, it also tends to have higher caffeine content. This is because the longer the roasting time, the lower the amount of caffeine found in the coffee, so it stands to reason that white coffee grounds would have some of the highest caffeine amounts available.

The Origins Of White Coffee

Although it’s currently popular for coffee shops all over North America to make and serve white coffee, this coffee didn’t originate in the U.S. Instead, it was first made in the Middle East—in Yemen, to be precise. In that country, white coffee has been brewed for hundreds of years. It’s a coffee that’s roasted to a light yellow color at lower temperatures, ground up, brewed, and then mixed with a blend of spices called Hawaij.

What is Hawaij? It’s a blend of spices that might include ginger, clove, cinnamon, and cardamom if it’s a sweet Hawaij, or cumin, turmeric, black pepper, or cloves if it’s a savory Hawaij. Of course, there are different versions of white coffee available in not only different parts of Yemen, but also in different countries including the U.S., Indonesia, Malaysia, and Lebanon.

One of the most frequent questions about white coffee (right after asking what it is) is if it has health benefits over black coffee. And this isn’t an easy question to answer. While white coffee does have more Chlorogenic Acid than black coffee, an antioxidant that scientists believe protects against inflammation and heart disease, we’re afraid that the science isn’t conclusive, yet.

The Pros & Cons Of White Coffee

Let’s take a few moments to address some of the pros and cons of white coffee. Although we’re not trying to dissuade people from trying this type of coffee any more than we’re trying to persuade them to try it, we do think it’s a good idea if all of our readers understand what they’re getting before they buy their next bag of white coffee available.

How To Make Traditional White Coffee

Okay, now that we all have a better idea of what white coffee is, we think it’s now time to talk about how it should be prepared. We think that we will begin with making a traditional white coffee as they make it in many parts of the Middle East first, and then we’ll talk about making an “Americanized” version of white coffee.

Step One: Assemble Your Ingredients

Step Two: Make The Coffee According To Moka Pot Instructions

Following your Moka pot instructions, make the white coffee as you would for any other types of coffee. Brewing white coffee is very similar to brewing black coffee, and when you’re done you should end up with a tan coffee that has a mild nutty flavor to it.

Once you have your coffee brewed, you can add 1-teaspoon of the Hawaij spice mix. This spice mix can be easily purchased online, but if you want to make it yourself, we’ve included a recipe on how to make it below.

Okay, here is the recipe for the Hawaij spice mix for those of you who want to make your own.

Place a frying pan on medium-low heat and then put all of the spices, except for the turmeric, in the frying pan. Fry them without oil until they’re warmed up and have begun to release their fragrance. Remove them from the heat and then place them into a bowl to cool. Once cool, grind all of the spices and then add the turmeric to it. Be sure to store in an airtight container in a cool dark place.

How To Make American White Coffee

Since we’ve covered traditional white coffee, we thought it would be a good idea to make an American version of this drink. Although there are tons of different types of white coffees made in the U.S., the following recipe is our favorite.

Now that we’ve assembled everything we need to make the drink let’s start making it. As you’ll probably notice about an American white coffee, it’s not very complicated to make, and it tends to be sweeter than traditional Middle Eastern versions of the drink.

In your glass add your creamer, hazelnut syrup, and a pinch of hot-chocolate powder. When that’s done, be sure to add approximately 1-cup of ice to the glass.

When the coffee has been brewed and the glass has been prepared, it’s now time to gently pour the white coffee into the glass. When that’s done, give it a gentle stir with your coffee spoon. You can now enjoy this icy American white coffee. 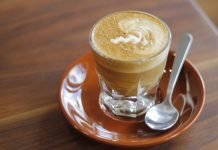 What Is A Cortado